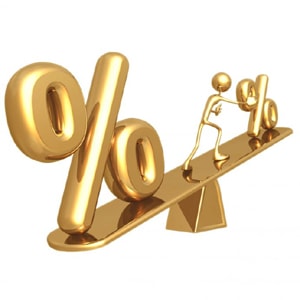 Interest rates right now are very close to their all-time historical lows. We’ve seen this a few times before. Here’s what you need to consider when getting what you perceive as the best mortgage rate…

Mortgage rates are in flux and have been in flux since the United States started keeping track of these numbers since the early 1970s. The average 30-year mortgage has been 6% from then to current so it’s important to keep things in perspective when seeking a favorable interest rate to purchase or refinance your home.

The possibility of getting a lower rate might be there for some people but to save .125 or .25 in rate on your amount financed might be as little as an extra $20 to $30 a month. The likelihood of lower rates is always there as is the same possibility rates could rise. Here’s the truth with mortgages and shopping for the best mortgage rate… Someone is always willing to do it for less guaranteed. So, is there really is a way to get the best interest rate when the gal down the street will do it for less, and then one after that will also do it for less? The mortgage business is very dog-eat-dog, and someone is always willing to do it for less, but you get what you pay for.

Interest rate risk is a huge concern for a bond holder. It’s because of this interest rate risk that will never see 30-year mortgages at 3% certainly not without preloaded discount point. Let’s say you can lend out your money at 4% or you can lend your money out at 3% what return would you prefer to get? 4%, right? A mortgage bond holder has the same goal. If you were to get a 3% mortgage rate (let’s just say in a hypothetical situation that you could), guaranteed it’s going to come with discount points because the market is such that 30 year conventional mortgages are just not there and if the market ever did get there it would dip down so fast and snapback that 3% would come with paying a bunch of points and fees because that risk would have to accounted for upfront preloaded. As rates rises the value of a lower coupon decreases. It would be much more profitable for that lender to get rid of that 3% loan and go lend money 4% or 5% or whatever the market is doing, hence the rate risk.

Let’s just say 30-year mortgage rates did get there for a short period of time. Let’s say the 10-year treasury rallied and we started seeing those type of levels on mortgage rates. The big Banks would not allow rates to be offered to consumers that low as they would control the market by raising rates to slow down volume. Big banks are notorious for this as operational bandwidth is tested and turn times are extend all before you guessed it, rates rising again. Remember the objective of any big bank is to drive profitability for shareholders. Think about that the next time you are applying for a mortgage loan.

Get a no cost mortgage quote now.